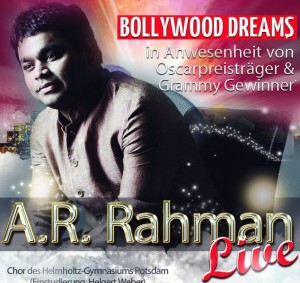 A R Rahman For the 1st time ever, a western classical orchestra ‘Babelsberg’ will be celebrating Indian Composer ‘A.R. Rahman’ in a series of live concerts across India!. Now in Germany, on 25 August 2012 at the famous Berlin Potsdam, A R Rahman’s live presence for the event “Bollywood Dreams”. Experience the exhilarating sound of more than 100 musicians performing the orchestral interpretations of A.R. Rahman’s film scores. So, for all AR Rahman’s fans, its going to be a big festival in Berlin and Potsdam this Aug 2012.

To mark the centenary of Indian cinema and of Studio Babelsberg, the world’s oldest film studio, based in Potsdam-Babelsberg in Germany, the German Film Orchestra Babelsberg performed a successful 2012 tour in India with musical genius A R Rahman.
In Germany, the film music composers live a rather unglamorous life. But where as in India, film music composers are regarded heroes and adored by Indians who are crazy about film. In the earlier 2012, the “Babelsberger Filmorchester“ learned about the hype in India when it toured through the country side by side with A.R. Rahman for three weeks.The tour is also part of the event ‘Germany and India 2011-2012: Infinite Opportunities’. Rahman is considered India´s most successful crossover musician. In 2009 he was awarded an Oscar for the film score to “Slumdog Millionaire” and he had worked with Mick Jagger and Andrew Lloyd Webber among others. The Filmorchester’s opening gala offers an enthralling cross section of the popular Bollywood composer‘s works, featuring young choir singers from Chennai and Potsdam.

Orchestra Babelsberg, based in Potsdam, Germany, and students of the KM Music Conservatory, Chennai, will perform orchestral interpretations composed by A. R. Rahman along with some evergreen compositions. Holger Schwark from Germany is responsible for the sound quality and sound design of the orchestral event.The 100-member strong musical alliance between the German film orchestra and students of Rahman’s KM Music Conservatory, Chennai, will perform orchestral compositions of Rahman.
Rahman has composed music for films such as Bombay, Swades, The Rising, Elizabeth:The Golden Age, Roja, Robot and many, many more. Understandably then, the Indian music maestro considers it a great opportunity for the Indian audiences to see how many musicians come together to create these scores. “I’m sure this will be a new experience for music lovers in India. Hopefully, it will also motivate younger artistes to become orchestral musicians,” says Rahman.

Apart from our Online Shopping Service for Indian Groceries and Spices, we do have an Indian Store located in Berlin, which is not far from the event location in Potsdam. So, don’t miss to check out authentic and tasty Indian, Sri Lankan, Pakistani grocery food items when you plan to visit Ar.Rahman’s live event.